Who are you? You’re not called James! 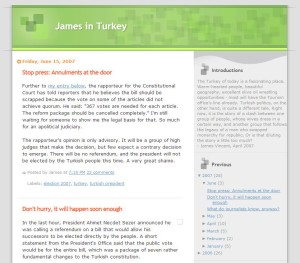 Back in the day

I’m Michael Sercan Daventry, a British-Turkish journalist based in London. I was born in the UK but raised in Turkey and I’ve worked for newspapers and broadcasters in both countries.

When this website began life, as a blog in 2006, I felt it was best to write under a pseudonym. My employer at the time had a low tolerance for extra-curricular journalism, as I discovered after writing this in response to a op-ed piece by Turkish columnist Mehmet Barlas. So James Vincent was born.

The pseudonym later became superfluous but “James in Turkey” was a brand. So I kept it.

By law, every Turkish political party must define a “shortened name” for itself. This does not necessarily have to be an initialism like “CHP”. The Justice and Development Party constitution, article 3, defines the party’s shortened name as AK PARTİ, which – cleverly, you might say – makes a pun out of the party name, “ak” being a Turkish word for ‘white’ and ‘pure’.

On this website I use each party’s chosen shortened name, except where I have to use initials because of a lack of space. Thus, I anglicise AK PARTİ to AK Party.

Other parties have done it too: in its final years, Erkan Mumcu’s Motherland Party (Anavatan Partisi) changed its shortened name from ANAP to ANAVATAN, while the People’s Voice Party (Halkın Sesi Partisi) used to call itself HAS.

This 10% electoral threshold. What is it and why does it matter?

I wrote about this nearly eleven years ago – see my entry from 13 August 2006, substituting Peace and Democracy Party (BDP) in place of the DTP, which has since been closed down. Several elections have since been held and, apart from CHP leader Kemal Kılıçdaroğlu endorsing a 7% threshold, not a thing has changed.

Can I get in touch?

Yes, please do. I’m @JamesinTurkey on Twitter. Alternatively, emails to contact@jamesinturkey.com will find their way to the right place.

This blog is powered by WordPress and Elegant Themes, albeit with a fair bit of tinkering.

6 Responses to :
About this site