All the king’s horses 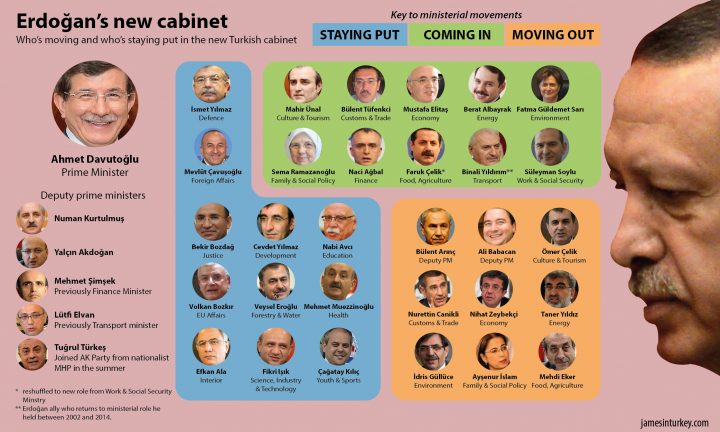 Tuesday 24 November 2015 is more likely to be remembered as the day Turkey became the first NATO country in more than half a century to shoot down a Russian fighter plane.

But it was also the day Turkey announced the ministers in its new cabinet. This is the seventh consecutive government to be formed by the AK Party – and Ahmet Davutoğlu’s third. With a healthy parliamentary majority and a four-year mandate under his belt, it’s also likely to be his longest-lasting government.

Well, we say his, but the composition of this cabinet should eliminate any lingering doubts that power in Turkey rests anywhere other than in the hands of the president.

At first glance, Davutoğlu III is the continuity cabinet. More than half the ministers (fifteen of them) served in Davutoğlu’s first cabinet, with eleven of those appointed to precisely the same portfolios. Many of the most important jobs – foreign affairs, defence, education, the interior – have returned to the politicians that held them before the 7 June election.

That, it could be argued, means a return to business as usual for Turkey’s natural party of government.

But the people who leave the cabinet with this latest round of appointments, and those who replace them, shows us that this is far less Davutoğlu’s cabinet than it is Recep Tayyip Erdoğan’s.

Deputy prime minister is a fairly hefty title in Turkish politics. It gives you the right to attend meetings of the National Security Council, a body chaired by the president and attended by cabinet heavyweights and military chiefs. You are also given a portfolio that includes things deemed too important to siphon off to ministries – oversight of the national broadcaster, for example.

This Davutoğlu cabinet does away with two veteran deputies – fiery critic Bülent Arınç, who stood down as an MP in June, and that apple of foreign investors’ eyes, Ali Babacan.

Babacan’s exclusion was rumoured, but is still something of a surprise seeing as Davutoğlu lobbied him personally not to step down from parliament at the last election. Finance minister Mehmet Şimşek’s promotion to replace him is an attempt to signal to investors that the Babacan zeal for economic reform will continue.

Presidential approval is required because any Turkish cabinet sets to work, but the sheer number of Erdoğanites appears to suggest Mr Davutoğlu barely had any input at all.

If you put aside Tuğrul Türkeş, who is rewarded with a deputy premiership for defecting from the nationalist MHP in the summer, two of Mr Erdoğan’s closest allies – Yalçın Akdoğan and Numan Kurtulmuş – retain their places just below Mr Davutoğlu.

There’s also the return of Binali Yıldırım, the longest serving cabinet minister during Mr Erdoğan’s time as premier, who inexplicably returns to become transport minister again. When Mr Erdoğan became president last year, Mr Yıldırım became one of his closest advisors – a role that apparently extended to keeping Mr Davutoğlu in check. Only in September were newspapers reporting Mr Yıldırım’s plans to stand against Mr Davutoğlu for the party leadership – on the president’s instructions.

Then we have Süleyman Soylu, the former leader of the centre-right Democrat Party who was handpicked by Mr Erdoğan to defect to the AK Party in 2011.

And much has been made of Berat Albayrak, the 37-year-old company director who has been catapulted into cabinet as Minister for Energy and Natural Resources barely six months after he first became an MP. He also happens to be married to Mr Erdoğan’s daughter.

A whole other world

How different things looked just five months ago. This website wrote then that the June election presented Mr Davutoğlu with an unparalleled opportunity to wrest control of the AK Party.

“Remember,” we wrote, “on not one piece of paper anywhere does it say the AK Party belongs to Recep Tayyip Erdoğan. Turkey’s president formally relinquished all ties to the party when he was elected to the politically neutral top job last year.”

We went on to say this election presents Mr Davutoğlu with the opportunity to prove he is Turkey’s prime minister, not its deputy president, and the only question was whether he would take that opportunity.

Surely this cabinet, and the election that caused it, shows “deputy president” is a fairly accurate description of Ahmet Davutoğlu’s job?

One Response to :
All the king’s horses