Women continue to be disgracefully underrepresented in the Turkish cabinet

Turkey’s new cabinet has – count them – two whole women, an increase of one on Davutoğlu’s last cabinet.

One of the new cohort is Sema Ramazanoğlu, who becomes the first cabinet minister to wear a headscarf. It’s an important step as the country finally buries the decades-old stigma it carried towards women’s headwear.

But she will be the minister for families, which is deeply problematic.

Many argue the Family and Social Affairs Ministry is designed to distract attention from women’s issues by pooling them in together with social policy.

The ministry itself was created in 2011, when then Prime Minister Recep Tayyip Erdoğan decided to merge several portfolios, including the separate ministerial position for women’s issues, into one.

It is here that the AK Party’s conservatism shines through: the party regards the family, not the individual, as the basic social unit. That’s why its election campaign towards women centred around lump sums to mothers for every child they give birth to, rather than, say, childcare options to help women to back to work.

The Turkish Federation of Women’s Associations described it at the time as “a response to the mind-set that refuses to recognise women as individuals and imprisons them inside the family”.

It seems that despite just becoming one of Turkey’s most senior politicians, Ms Ramazanoğlu is also trapped inside the family.

The only other woman to join the cabinet is Fatma Güldemet Sarı, the new environment minister.

The ministries that handle some of the most critical issues facing today’s Turkey – defence, foreign affairs, interior and justice – are held, and always have been held, by men. The only exception is education, where Nimet Baş had a single two-year spell as education minister.

It’s a dreadful record – and it isn’t just the present governing party that is guilty of it. 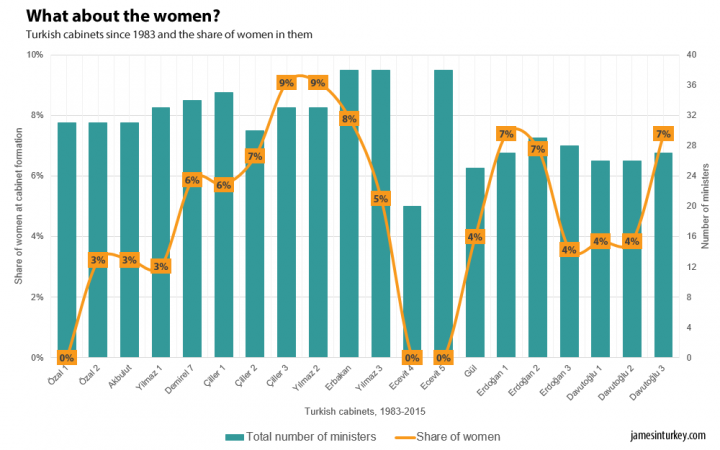 The new Turkish cabinet has doubled its women ministers – to two

Turkey’s first woman minister was Türkan Akyol, who became health minister in the non-partisan technocratic government of 1971. It wasn’t until the 1980s that women were routinely appointed to the cabinet, but their share has never reached double figures. Their numbers never exceeded three.

The chart above is exaggerated to show the peaks and troughs in successive cabinets. The share of women ministers reached the dizzying heights of 9% during Tansu Çiller and Mesut Yılmaz’s latter governments, but don’t that shouldn’t deceive anyone. It was still three women in a room of thirty men.

The situation is not much in parliament, either. Have another chart: 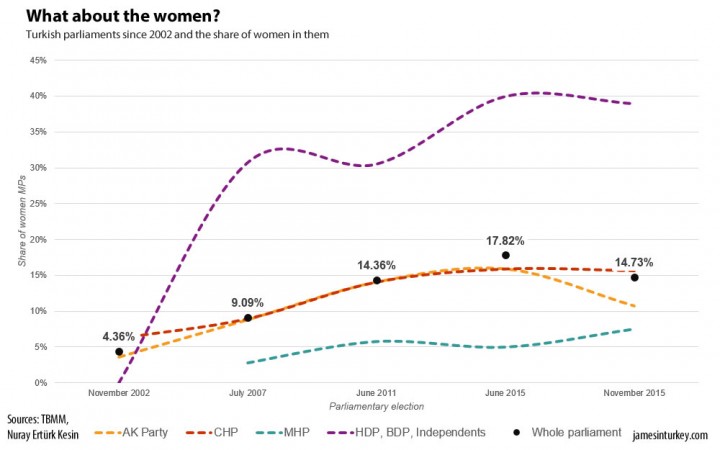 With the notable exception of the pro-Kurdish HDP, Turkey’s political parties have barely changed the number of women in their ranks in over a decade. Surely that’s a disgrace?

All the king’s horses

A new face for nationalism

One Response to :
And what about the women?