The prime minister may have quelled unrest for now, but there’s a catalogue of it building up in Turkey’s governing party 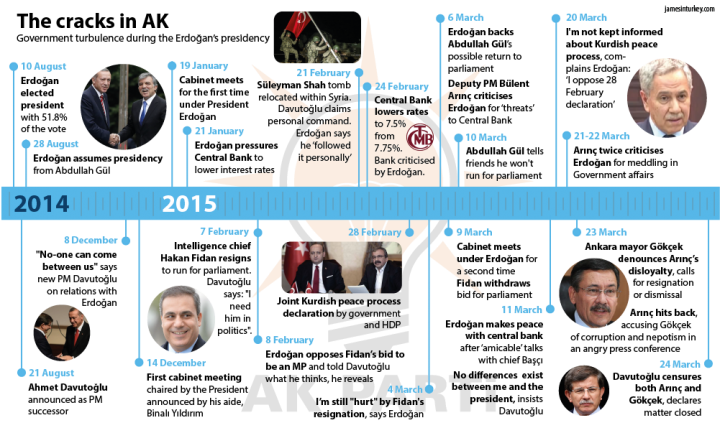 Click to enlarge: the cracks in Turkey’s governing party

There is a definite ceasefire in force at the headquarters of the AK Party following a very public spat between the deputy prime minister Bülent Arınç and Melih Gökçek, the Mayor of Ankara. The two were rebuked by Ahmet Davutoğlu, prime minister, for endangering party unity and not using “established channels for grievances”.

“This discussion is over for me, according to both our understanding of party discipline and our principle that allows the expression of democratic views inside the party,” he told reporters on Wednesday, according to Hürriyet Daily News.

Mr Arınç later appeared to accept he had overstepped a mark, but pointedly did not withdraw his accusations of corruption and nepotism. Mr Gökçek, for his part, said after a meeting with the prime minister that he would be making no more comment on the matter.

That, you may think, is that. But it’s not: the Arınç-Gökçek argument is but one episode in a series of tremors that have appeared since Recep Tayyip Erdoğan relinquished his party’s leadership and become president last summer.

There have been tensions aplenty among senior AK Party figures, including Mr Erdoğan, over the Kurdish peace process, central bank interest rates and the party’s selection of candidates for the general election. The graphic above will help chart some of the most prominent of these.

The question for those concerned about the AK Party’s stability is this: was Arınç v. Gökçek the main event, or does it foreshadow greater events?

The cracks in AK