Turkey’s government is planning a wholesale reorganisation of the two provinces in the country’s far southeast, according to proposals laid before parliament

It appears the names of Hakkari and Şırnak, long associated with Turkey’s Kurdish population and the ongoing conflict with the PKK, are soon to disappear altogether.

The proposed law has not yet been published on the Turkish parliament’s website (*see update below), but a report by NTV says it will see Hakkari province will renamed after Yüksekova, a slightly larger nearby town.

The town of Hakkari that lends its name to the province will be renamed Çölemerik, deriving from Colemêrg, its the Kurdish name.

Neighbouring Şırnak province, meanwhile, will take the name of Cizre – again, another larger town in the province. The town of Şırnak will be renamed Nuh, or Noah, an historical name deriving from legends of ark remnants found in the area.

The government argues both new town centres have larger populations than the ones they replace, making them more ideal provincial capitals.

And it doesn’t look like the new provinces of Yüksekova and Cizre will change their boundaries with other provinces, meaning no significant shifts in population and no change to the number of MPs they elect to the Ankara parliament. 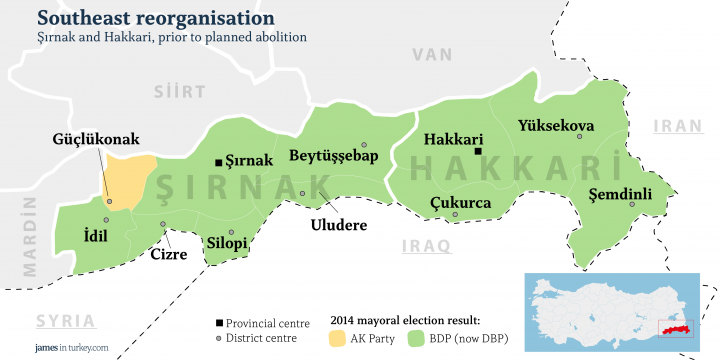 The old Şırnak and Hakkari as they stand today 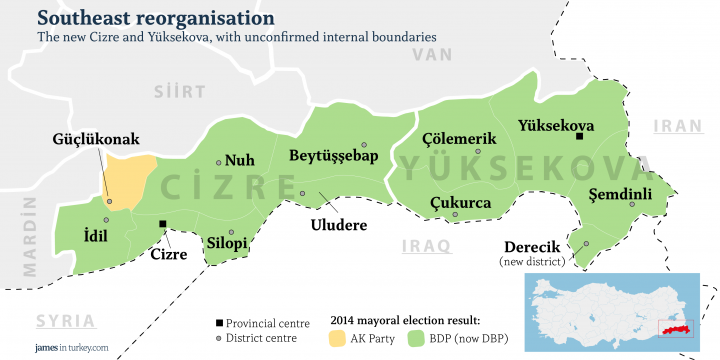 In last November’s election Şırnak elected four MPs (all from the pro-Kurdish HDP) and Hakkari three (ditto). The two provinces are overwhelmingly and unsurprisingly Kurdish: only the tiny district of Güçlükonak was won by the governing AK Party at the last local elections in 2014.

Clashes between the Turkish security forces and fighters from the PKK/TAK have surged dramatically since then.

Much of the area has become a war zone: tens of thousands have been displaced from their homes and accusations of human rights abuses abound. Earlier this year, the co-mayors of Hakkari were sentenced to 15 years’ imprisonment on charges of separatism and Cizre, the new provincial centre, was left in ruins.

NTV’s report suggests the provincial reorganisation is part of a government effort to combat PKK activity in difficult terrain and help develop the area. Both Hakkari and Şırnak are in narrow, mountainous areas while Yüksekova and Cizre are on flatter ground that would allow them to grow as local centres.

The law will pass: this isn’t a constitutional change and the AK Party has enough votes to push it through. The real question is what pro-Kurdish parties like the HDP will say.

There’s no response yet at a party level, but Şırnak MP Ferhat Encü told Kurdish news site Rudaw that the government’s plans were part of efforts to change the “determination and culture” of the area and increase the police and military presence there.

* This article was updated on 4 August with the final borders as outlined in the law laid before parliament. Districts like Güçlükkonak and Beytüşşebap are, in fact, not being abolished.

* Second update: On 19 August, the government announced it was scrapping these proposals entirely. Hakkari and Şırnak will remain as provinces and not be renamed; Cizre and Yüksekova will remain districts. The decision prompted a standing ovation among opposition MPs, T24 reported.

A step back from the death penalty

One Response to :
Gone: Hakkari and Şırnak

Leave a Reply to abdul in the usa Cancel reply