Let the man rest in peace

Atatürk was a great leader, but so many followers are getting his legacy wrong. 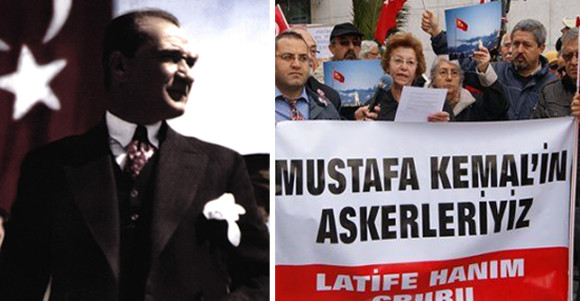 At the end of May, as police withdrew from Taksim Square, I was invited to a glitzy wedding by the Bosphorus. The bride was a TV news presenter; the groom a local restaurant owner. Both families could firmly be counted among that section of Turkish society many describe as “secularists”: staunchly opposed to the AK Party, incandescent at creeping religiosity, ardent supporters of Atatürk’s legacy.

Such so, in fact, that the wedding was briefly interrupted at 9pm so guests could add to the nightly “utensil-banging” protest. Waiters handed dessert spoons around and guests politely tapped them on the polished wooden tables in anger at what their country was becoming.

Later in the evening, I found myself a chatting to another guest, a woman in her thirties who was a middle-ranking civil servant at the Ministry of European Union Affairs. She was part-educated abroad, spoke several languages and spent some years in the national swimming team. She was as far as you could possibly get from the headscarf-wearing, conservative Anatolian voter that the AK Party relies on.

Inevitably, we spoke about politics, but it became quite clear quite quickly that we were not cut from the same cloth. We agreed the police’s heavy-handed response was disgraceful, but I didn’t join her in roundly condemning everything to do with the AK Party government. They wouldn’t have been in power for eleven years if they weren’t popular, I reasoned.

The woman’s brow furrowed. Without missing a heartbeat, she asked a devastating question.

“Do you love Atatürk?”

My first mistake – having had several glasses of wine – was to hesitate. My second was to answer imprecisely.

I tried to explain myself.

I explained that I was a keen historian, had studied Atatürk closely and understood the remarkable changes he brought to Turkey better than many. My problem, I said, was with the way some followers have chosen to interpret his legacy. His word has become dogma for so many, and this diminishes respect for the man himself.

But it was in vain: the conversation was dying fast. As far as she was concerned, I just didn’t get it. I was just another one of those Turkish-speaking foreigners who swoop in with Western attitudes but no understanding of what made Turkey different.

That was that. We didn’t exchange business cards. We barely spoke for the rest of the evening. It was a real shame.

Today, 10 November, is the anniversary of Atatürk’s death. It was marked by sombre ceremony, with people across the country standing still at 9.05am, the moment he passed away in 1938. Today was also Remembrance Sunday in Britain, with the Queen leading a moment of silence in central London at 11am.

I have often wondered whether I am hypocritical in criticising the perpetual cult of personality surrounding Atatürk and the reverence with which he is held, when western countries like Britain treat their war dead in a similar way.

The British sense of symbolism surrounding the poppy flower is one example. Every year the debate is the same: they’re worn too early, taken off unnecessarily for international broadcasts or never worn at all. How different is this skewed symbolism than the interpretations of Atatürk’s legacy in Turkey?

The difference is that British politics does not revolve around the World War dead. There is respect for how they fought fascism and did so with their lives, but rarely today does any politician use them to score political points. The phrase “Is this what our war dead fought for?” has largely left British politics. 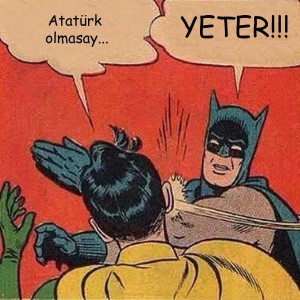 Spotted on Facebook today (“If it wasn’t for Atatü…” / “ENOUGH!”). Sacrilege or zeitgeist?

Compare that to Atatürk’s legacy. Protesters calling themselves “the soldiers of Mustafa Kemal” (see photo above right) is one thing, but is it sacrilege to fail to proclaim love?

Atatürk died 75 years ago, leaving behind the sole working example of a western-facing, predominantly Muslim country. Turkish schoolchildren should rightly be taught about his progressive attitudes and how they transformed the country in which they were born.

But as with any leader from an older generation, he lived in a different time. Not everything he did is relevant today. Let the man rest in peace.

Arınç and Erdoğan: the Thatcherite rift

2 Responses to :
Let the man rest in peace