The halfway point has now been crossed in the period to nominate candidates for Turkey’s presidency.

This morning, the official candidate count stands at zero, the number declared is no greater than two, and the speculation for others is more intense than ever before.

The deadline for nominating candidates is, as Prime Minister Recep Tayyip Erdoğan has often reminded us, midnight on the evening of Wednesday 25th April. Not one person has gone to the specially allocated office in the Turkish parliament to nominate either themselves or another, although yesterday the first MP to declare revealed himself to the press. 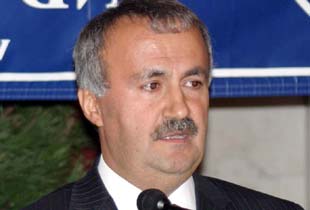 Ersönmez Yarbay (right) is an AK party deputy for Ankara. He told excited reporters yesterday that he was putting himself forward because he was feeling increasingly uncomfortable at the lack of candidates. His candidacy should be taken about as seriously as that of Metin Uca, the former gameshow host who fielded himself as a compromise candidate a couple of weeks ago.

Both say they are compromise candidates: Mr Uca says he is not an MP and has a greater chance of being politically neutral, while Mr Yarbay says he will go and register if no other AK man does. The problem is not whether an AK deputy will register. Everybody knows there will be somebody; it is now a question of who, and when.

Mr Erdoğan’s candidacy is still nothing but guesswork. I myself am still not committed on the issue. Just on Thursday, I was convinced that he would be running after his notable absence – and foreign minister Abdullah Gül’s notable presence – at a meeting announcing Turkey’s EU reform programme. But this morning’s papers have the story of a group of Istanbul fishermen happily greeting the prime minister rather than the president. Mr Erdoğan apparently welcomed the sentiments. Oh, I am confused.

The other substantial development in Ankara yesterday was a meeting between Mr Gül and parliament speaker Bülent Arınç. Both men left the meeting saying they were concerned at the level of media speculation, that there were no differences of opinion between them or with Mr Erdoğan, and that the two of them were agreed upon the same candidate. Of course, they did not say who that candidate might be.

So as we enter day six, there is little new of substance to report. Mr Erdoğan is still the leading candidate, in that there is no doubt he will win if he runs. Mr Arınç and Mr Gül are second-placed. The other serious AK candidates are those whose wives don’t wear headscarves. There is also talk of an woman candidate – Nimet Çubukçu, the cabinet minister for women and family affairs, would be the obvious AK choice there.

There is still faint hope of a compromise candidate, selected from outside parliament. Some newspapers have picked up on the speculation this morning: Sabah‘s headline is “I wouldn’t object to a fourth candidate”, quoting Mr Arınç yesterday, while Star went for “Everyone will be astonished”, saying Mr Erdoğan feels their candidate will be a surprise choice.

Has anyone heard from Hikmet Çetin recently?

Is this Turkey’s new president?