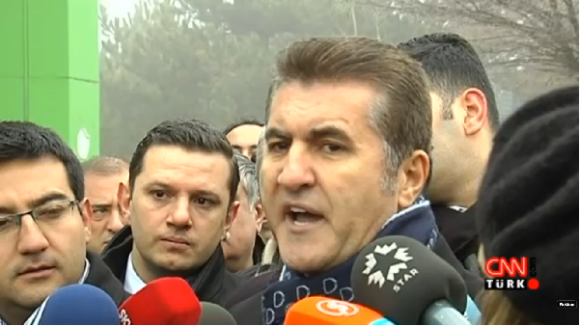 On Friday morning Mustafa Sarıgül, darling of the non-CHP Turkish left, braved the cold Ankara weather to hand in a personal submission to the Constitutional Court. He was objecting to a new law that shakes up some parts of local government in Turkey – in particular, the bit of the law that strips Istanbul’s Şişli district, where he is mayor, of its richest neighbourhoods.

The offending law – number 6360 – was approved by less than half parliament’s MPs, mostly those from the governing AK Party, on 11 November last year. The principal changes brought by the law were to thirteen cities, which saw their central councils upgraded to büyükşehir (metropolitan municipality) status, the most devolved form of local government in Turkey. The status effectively creates a supercouncil, overarching other urban councils in the city and bringing in more funding from central government.

The new arrangements make sense. It is reasonable to expect Van, a city in eastern Turkey home to a little over a million inhabitants, is not governed under the same system of local administration as northeastern Bayburt, which has a five-figure population. Turkey’s 16 largest cities are already büyükşehirs; among the new set of thirteen, the people of even the smallest city number three quarters of a million.

As Turkey urbanises, its cities are growing rapidly, which is why this part of the new law was not hugely contentious: all the major parties had pledged some form of büyükşehir extension in their last election manifestos.

Şişli is a different story. As I explained in a post last October, this Istanbul district is home to the city’s blossoming business district. It is also home to a large number of AK Party voters (although not necessarily as many left-wing voters – see my earlier post for more on this). Suffice to say it is valuable enough for Mr Sarıgül to want to fight for.

And fight for it he did. Mr Sarıgül went to Ankara and tried to convince MPs to fight his corner after the bill reached the general assembly. But for one of Turkey’s best known left-wing politicians, he has remarkably little clout among Ankara’s political elite – because he is not a member of any party. The inadequacy of his schmoozing was reflected in parliament’s debate of the law: only a few CHP MPs raised objections to the Şişli proposals during the session.

Fewer still bothered to turn up and vote. Just 260 out of a possible 548 sitting MPs voted for law 6360: it carried with 223 votes in favour and 37 against. Forget the paltry number of opposing votes; the governing AK Party did not even bother to field all its 326 MPs. This was simply not a controversial law.

Mr Sarıgül argues the law is unconstitutional because it did not have crossparty support. But Abdullah Gül, Turkey’s president, told reporters shortly after he approved the bill that his legal team found no reason not to approve it: a government decision to change council boundaries is perfectly constitutional, regardless of how many parties vote for it. The Constitutional Court is likely to agree.

For the mayor of Şişli, this is a barely-concealed play for a greater role in politics. He is widely believed to seek the Istanbul büyükşehir mayoralty at the next election in 2014 and, if he rejoins the CHP and becomes its candidate, he is likely to win it. He served one term as an MP for Istanbul in the early 1990s and has spoken openly of returning to parliament.

Plainly, there is plenty more to come from Mustafa Sarıgül.